VSBW, a joint venture between VolkerStevin and Boskalis Westminster has been appointed as the main contractor for delivering new sea defences in Southsea worth £100m. 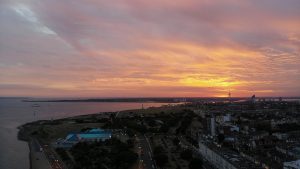 The Southsea Coastal Scheme will provide flood protection to more than 8,000 properties and 704 businesses at risk, due to ageing existing coastal defences along 4.5km of Solent coastline.

VolkerStevin and Boskalis Westminster, both formed in the UK in the 1930’s, have a proven track record of collaborating in joint ventures, having previously joined forces for the likes of the £115m Dover Western Docks Revival scheme.

VolkerStevin has extensive experience working with a number of local authorities to deliver successful flood defence schemes. VolkerStevin has also been working with the Defence Infrastructure Organisation to reconstruct the jetty at Her Majesty’s Naval Base Portsmouth for the new Queen Elizabeth Class (QEC) Aircraft Carriers.

Boskalis Westminster has also worked across the country, delivering marine infrastructure and coastal schemes and is one of the UK’s most experienced dredging and marine contracting companies. Boskalis Westminster recently carried out the capital dredging of approximately 3million m3 of material, with approximately 750,000m3 material stored for later beneficial reuse, and the detection/removal of unexploded ordnance and other debris to accommodate the arrival of the new QEC aircraft carriers into Victory Jetty in Portsmouth.

Rob Coupe, on behalf of VSBW said, “We are delighted to be joining the team delivering this project. We have been impressed with the quality of work put into the Scheme already and are looking forward to getting on site and delivering new defences for Southsea.”

The tender for construction works was issued to a shortlist of three contractors, all of whom were selected following an open-market supplier selection process, which evaluated the experience and capacity of each company to deliver this large-scale complex project.

Following the initial process, Bam Nuttall, Van Oord/Mackley and VSBW were identified as the shortlisted companies to compete in a further multi-stage selection process to identify the successful bidder.

VSBW will promptly join the project team, providing assistance to the council and newly-appointed design consultant, Royal HaskoningDHV, with input into the detailed engineering design, pre-construction site surveys and enabling works ahead of construction on the first phase which will begin in early 2020 should planning and funding approvals be gained.

Cllr Dave Ashmore, cabinet member for environment and climate change said “This intensive procurement process has allowed us to identify a very capable, proven contractor who will now be at the helm of delivering this very important piece of work for Portsmouth. The integrated project team will continue to engage with the public throughout what will be an exciting project.”

The Scheme is currently seeking planning permission and should this and funding approval be given, work will begin on the first section of defences in spring 2020.